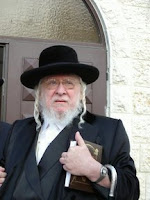 The earthquake here in eretz yisroel was felt sometime after midnight. In the morning one chossid jokingly said it was Hashem rocking us in bed like a mother rocking her child in a cradle.
During Shalosh Seudos the Rebbe shlit"a said that after feeling the earthquake in the middle of the night he was pondering the meaning of trembling and awe and fear of G-d what we call in lashon hakodesh, Yiras Shamayim with retes, ziya and ra'ada.
The Rebbe gave a mashal using the parable of a tuning fork, where once hit the fork resonates a tone. One tine of the fork is hit however the companion tine shkes as well. Scientifically this is due to sound waves which are oberservable phenomonen in water. If I throw a pebble into water the water waves ripple and I can see the movement. This is tru in air as well but our eyes cannot observe it.
The Rebbe explained that what is true in the physical world holds true spiritually as well. If my neighbor quakes and shakes the message is that I must be shaking and trembling as well. Sometimes Hashem's message is that we have to unite and feel eachother's pain and fear. Perhaps this is one of the lessons of yiras shamayim.
Posted by TZ at 5:20 PM