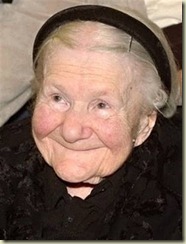 Many Jewish organizations throughout the world honor the Chasiday Umos HaOlam, the righteous among the nations but specifically referring to those non-Jews who risked their lives to help Jews survive the Holocaust.  Unusually, a Polish woman who saved over 2500 children in the Warsaw ghetto was first identified and honored by a group of Kansas city public school students who discovered, researched and compiled her story into a unique project which they named "Life in a Jar."
The story of Irena Sendler was almost unknown until the schoolgirls embarked on their mission to ascertain the verity of the events and let the world know about Sendler's selfless acts of bravery.
Irena Sendler was a non-Jewish social worker who joined the Polish underground, Zagota, in 1939 following the Germans invasion of Poland. Zagota specialized in helping Jews escape the Germans and, as part of the effort, Sendler obtained a pass to enter the ghetto as a "specialist" in infectious diseases.
Sendler quickly realized that the Nazis intended to murder all of the ghetto's Jews. She began to smuggle children out of the ghetto, sometimes through sewer pipes that ran under the city and at other times through the Old Courthouse that sat on the far edge of the ghetto. She also sedated young children and carried them out in toolboxes or hid them under tram seats which ran out of the ghetto.
Many of the children that Sendler saved were orphans, but others had families and Sendler had to convince their parents to allow their children to be taken out. "I talked the parents out of their children" Sendler later recounted.
Once the children had been removed from the ghetto, Sendler and her associates located families who were prepared to take the children into their homes for safekeeping. This act was punishable by death but Sendler was able to find homes for all of the children. Sendler documented the children whom she saved by writing their names and hiding places on scraps of tissue paper which she then buried in jars in her garden. She hoped to reunite the children with their families after the war or, if not, at least with the Jewish community.
Irena Sendler was captured by the Nazis in 1943 and tortured, but she never revealed any information about "her" children. Zagota members were able to bribe a German guard to release her and Sendler lived out the last years of the war in hiding.
Irena kept a record of the names of the kids she smuggled out and kept them in a glass jar, buried under a tree in her back yard. After the war, she tried to locate any parents that may have survived and reunite the family. Unfortunately most had been gassed at Treblinka.
Although Sendler managed to save an amazing number of Jewish children, her deeds and the deeds of the Zagota members, were not publicized until the 1990s when a school project, "Life in a Jar," exposed the incident. Since that time the project has continued to grow through the funding of a Jewish philanthropist and other researchers.
In 2007 Irena was up for the Nobel Peace Prize. She was not selected.  Al Gore won, for a slide show on Global Warming.  He picked up his prize after arriving on a private jet.
Mrs. Sendler passed away in 2008 at 98 years old, clearly one of the righteous among the nations.
Posted by TZ at 9:41 PM