Degel Machene Ephraim Shemini
וְאֵ֣ת | שְׂעִ֣יר הַֽחַטָּ֗את דָּר֥שׁ דָּרַ֛שׁ משֶׁ֖ה וְהִנֵּ֣ה שׂרָ֑ף וַ֠יִּקְצֹ֠ף עַל־אֶלְעָזָ֤ר וְעַל־אִֽיתָמָר֙ בְּנֵ֣י אַֽהֲרֹ֔ן הַנּֽוֹתָרִ֖ם לֵאמֹֽר
A good friend of mine pointed out that "In Vayikra 10:16, the words דָּר֥שׁ דָּרַ֛שׁ ("inquired insistently" mark the halfway point by word count in the Torah. In many Chumashim, the phrase "Half of the words of the Torah" is written in small print between these words.
The Degel Machaneh Ephraim explained that this hints to the fact that the Written Torah is only half of the Torah. The other half of the Torah can be found in the Oral Torah; the part of the Torah where the Rabbis "inquired insistently" to expound upon the Written Torah's meaning. "
I have translated the Degel's words here:
We need to try and understand what the mesora and tradition is teaching is that at this point in the Chumash in between the words Dorash darash we find half the letters of the Torah accounted for, what do we learn from this idea?
In my humble opinion that answer is that we know that both the written and oral Torahs are really one whole and not separate disparate parts. One cannot exist without the other because the oral Torah reveals hidden facets and secret meanings in the written Torah's text. Therefore without the oral tradition the Torah remains unwhole, it is half a book.
Until our sages, Chazal arrived and when they expounded and explained the written Torah and revealed its hidden meanings and secrets and even uprooted things based on the holy intuition of Divine spirit known as ruach hakodesh for example in Devarim 25:3 it teaches us that we are to administer forty lashes, but Chazal said it should only be thirty nine.
This Divine intuition and spirit of ruach hakodesh gave them the ability to truly see what needs to be done and how to interpret. We have seen demonstrated that the Torah's wholeness is in reality only when both the oral and written Torahs are together for the written depends on the interpretation of the oral tradition.
This is why we say that anyone who defies Talmudic logic or argues with the statements of our sages, Chazal, he us considered to have argued against and disbelieved the Torah of Moshe Rabbeinu, for everything depends on the dershaos of Chazal and they are the primary way to create the wholeness of the written Torah.
This is what the words here Darosh Darash - these are half the letters of the Torah, hint at, it teaches us that until Chazal, our sages darash - expounded upon, explained and interpreted the written Torah through their derashos, until this the Torah is only half, just an incomplete partial document, only part of a whole. The dershaos and statements of Chazal complete the Torah and make it a whole document and a complete book. Understand this.
Original text below: 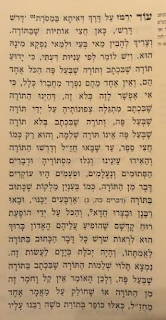 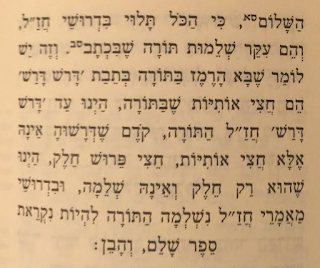